In 1974 the Spanish Prince Alfonso Se Hohenlohe visited a friend in Mexico and got introduced to a version of Tennis with a small court surronded by walls. They played the balls in all directions, backwards, to the sides and of course as in normal tennis! When he got back to Spain he adjusted the rules a bit, called it padel Tennis. He build the two first courts at Marbella Club and since then the sport has developed to be one of the fastest growing sports!

Spain has now over 20000 courts and 2,4 millon registred players, only soccer is bigger than padel in costa del sol!

And of course Andalucia and Costa Del Sol still is one of the best places to play padel! Here you have one of the best climates in the world, wich allows you to play outdoor all year. Most of the padel courts are outdoor but in some places they have indoor courts to!

Padel is a very easy sport to participate in, if you travel to Costa Del Padel (yes, they try to establish this name) alot of the different clubs arrange tornaments every week. If you come without a partner they pair you with other players. So if you are a registred player they team you up with other players in the same level as you! There is four levels in the tournaments and Level 1 is for the best players!

There are three different shapes of the padel racket: Round, Drop- and Diamondshaped. The round ones are good for the beginners since the ”sweetspot” (the place where you get the best hit) is a little bit bigger than the other shapes! If you have played a little bit and see yourself as an amature you should go with the dropshaped racket, and if you see yourself as an proffessional you will use an diamond shaped one! The padel racket has three components, the frame, the surfaces and the foam in between.

When playing padel it is important to have clothing that are easy to strech in, there are many new brands that makes padel clothing, but also the classic tennis clothing works well! When it comes to the shoes you must have a show with good grip, so the sole must have a coarse pattern (like tennis shoes for gravel courts)! Even if it gets hot, most of the clubs have a T-shirt on policy!

Alot of the padel clubs are open 9.00-23.00 so you can play when ever you like! In the weekends they might close a few hours earlier!  Usually the have some kind of bar/refreshment service!

So what does it cost?

To rent a padelcort is about 12-25 euro normaly, but in some more exclusive clubs it cost more! If you like to get an personal trainer you can ad another 35-50 euros. If you go to a group class the cost will be from 10-30 euros/person. You can book 60, 90 or 120 minutes, but 90 minutes is the most common time for a game! If you need you can also hire a racket, usually from 2 euors!

4 padel courts on the beachfront (that is rare)!

12 of the best padel courts in the area 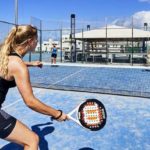 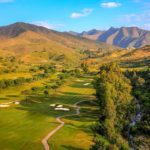 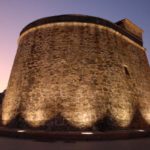 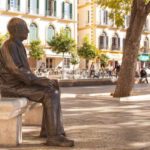